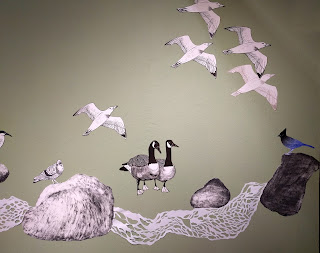 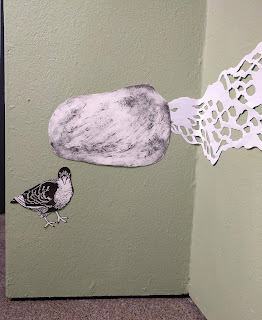 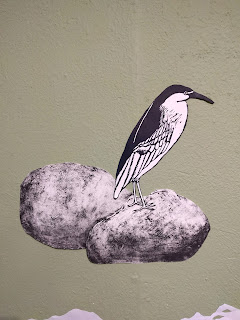 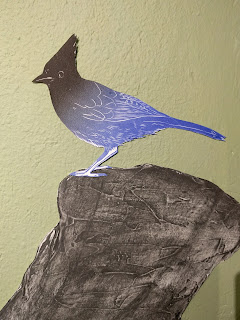 I have a new installation up at Works Gallery in San Jose, as part of Eco Echo: Unnatural Selection. See the press release here. Here's a sneak peek! Click on the pictures for a larger view.
Posted by Rocinante Press at 12:16 AM No comments: 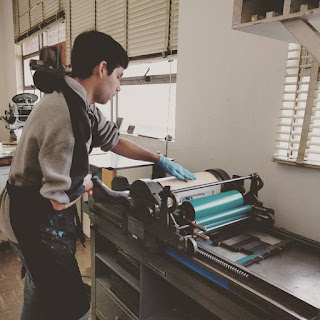 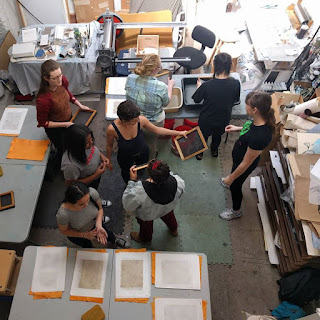 Last week, my San Jose State students started printing on our new Vandercook (we're calling her Hermes). The same day of the first student to use the press, I also had students from the Mills College Book Arts Program visit my studio to learn about papermaking.

Also on that same day: the United States dropped its largest non-nuclear bomb on Afghanistan.

I tried to say something like this that day, but it came out garbled: papermaking and printmaking have a long legacy of being part of resistance movements. It was not lost to me that on the same day a bomb was dropped, I introduced these processes to a new generation. I can only hope that by continued teaching of this craft, this legacy, and the fight therein, will continue.

This isn't just a blog post; it's a prayer.

Posted by Rocinante Press at 4:18 PM No comments: 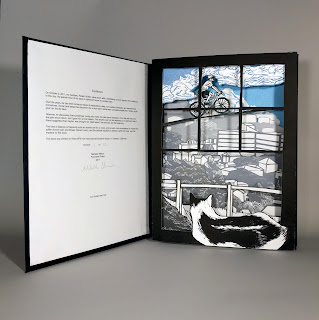 While working on all my Autonomous Drying experiments this past fall, I was also working on a new artist book, which was just released this past month at the Codex Book Fair. It was funny how many artists commented at that event that Codex has become a deadline for new books.

This book is a bit more personal that anything I've worked on in a while. Titled Equilibrium, it's a tunnel book made up of some personal symbolism and story. The idea for this book came from a suggestion Enrique made to Robert while they were talking about his condition. Robert had mentioned that when he was riding his bike, his pain dissipated. Once the ride was over, it came back, and the results could not be duplicated on a stationary bike. Enrique suggested that maybe it wasn't the exercise, but the balancing.

As someone who constantly is constantly juggling work, art, home, friends, health, you name it, the idea of balance is frequently such an elusive one, and is even more complicated for those who suffer chronic pain and illness.

Interestingly enough, a gentleman came up to my table during the fair, who was coincidentally also named Robert. Without reading the colophon, he started asking me about the book, mostly regarding bike riding. As I started to explain, I came to the part where I was saying,"It's not the exercise..." in which Robert snapped his fingers and interjected before I could, "It's the balancing!"

He went on to explain that it's the same for his condition (Parkinson's), and that stationary bikes also don't have the same affect.

I'm not sure what to determine from this anecdata. The idea of balance as form of healing both literally and metaphorically is something to think about.

As for right now, I'm gearing up for the new few months. March is has some big events coming up - Book Bombs will be at the Center for Book Arts for our Keeping the Fire Alive workshop on March 4 - which, crazily enough, we proposed to do waaaay before the election. The Rhinoceros Project will be part of the 100 Days of Action and Print Public at the Kala Art Institute on March 11 from 12-4, and then traveling to the Sierra Nevada Steamroller Print Festival on April 22.

So...while all this is going on, keeping in balance is tricky, but I try.
Posted by Rocinante Press at 3:08 PM No comments: 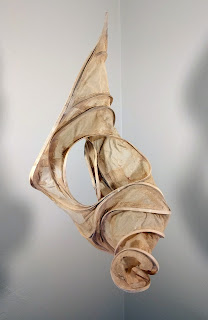 The autonomous drying experiments continue. (Previously here and here). Just documented this new set, although I'm still sorting through the photos - there are more works than I'm posting here. Click on the images for a larger view.

In other news - the Rhinoceros Project continues! And check out this interview with yours truly on Art Talks Again. As an avid podcast junky, it's so thrilling! 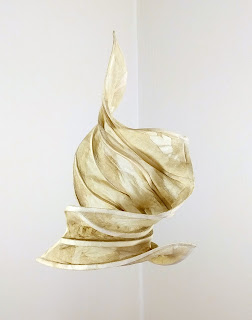 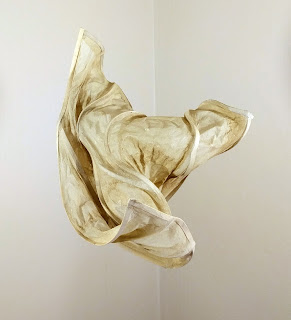 Posted by Rocinante Press at 3:17 PM No comments:

My autonomous drying experiments continue - here's a few shots of the progression of one piece, not exactly from start to finish, but it gives an idea of the dramatic changes that happen as the piece dries.

Many of the artists at SVP who see me working on these are completely surprised at how they end up, so I wanted to show that yes, they do start out flat. It's the fiber that warps them into their form. The finished pieces really should be viewed in the round; they look like completely different pieces from one side to another.

I'll be sharing this process, and other sculptural paper techniques in my upcoming class in January! 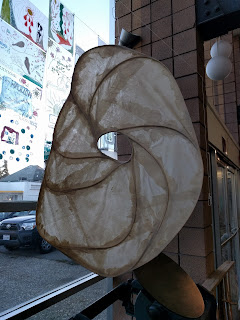 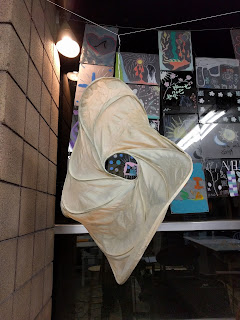 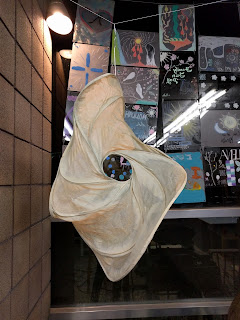 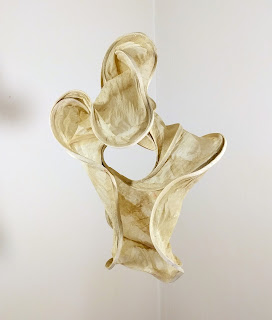 In other news, the Rhinoceros Project continues!
Posted by Rocinante Press at 11:38 PM No comments:

The Rhinoceros Project at Ramon's Tailor 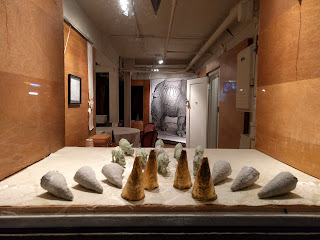 The Ramon's Tailor installation is up! Visit here to see a sneak peek!

Our opening reception is tomorrow, November 19, from 3-6 PM. Join us at 628 Jones Street for sewing circles, rhinoceros cookies, and rhino ephemera!

We will be in residence on Saturdays and Sundays, 12-4, till January 8. Visit us to take a break from the holiday craziness and sit, sew, and share! 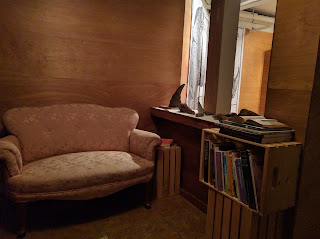 Posted by Rocinante Press at 1:49 PM No comments: 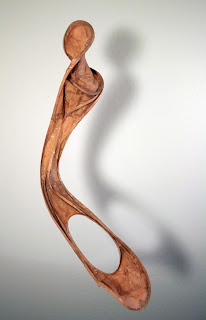 During my residency at the School of Visual Philosophy, I've been experimenting with paper sculpture. For the past year, I've been examining my personal studio practice, and how I plan and plan and plan and then execute said plan, and then feel a certain exhaustion. And again and again I remember the idea, listen to the process. Which is a bit scary for me; unpredictability and always a struggle for time creates an environment that encourages planning and discourages experimentation and risk taking.

This came to a head for me, privately, when I was mentoring a student who was trying to do the same thing: plan out her project in its entirety from the start, because she's juggling work and school and has very little time. And, while I understand this, I was counseling her to remember to take a step back, to observe and question. Then I realized how little I do that myself.

As a installation, print and book artist, some planning and project management is necessary. Yet I realize that I wasn't doing much experimentation, that I wasn't discovering the unexpected. I was checking things off a list.

So when this opportunity was offered to me, I pushed myself to step outside of my comfort zone, and try things in which results were not guaranteed. I started with small tests like these, and, building on the tests I discussed here, I pulled out some reeds I had left over from this project to build some armature tests.

Again, it was scary, I didn't know what to expect. I'm not sure what these mean in the greater vision of typically narrative-driven work, and if the question of having one's vision adapt and grow is even scarier than the original risk.

As for what I've determined so far: all of these armatures started out relatively flat, the shapes they formed is just from the flax warping as it dried. I'm starting to notice patterns of what causes it to warp a certain way, but nothing reliable yet. I'm also still working on how I can integrate this technique into my greater body of work, and how can differentiate myself from the amazing Peter Gentenaar.

However, if you're interested in trying some of this yourself, and learning a few other things, join me for this workshop in 2017 in San Jose! 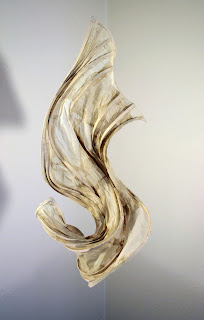 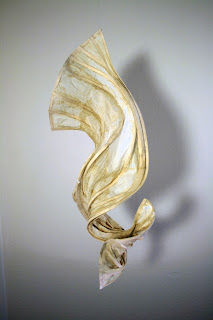 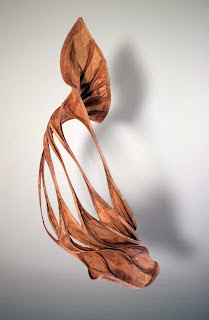 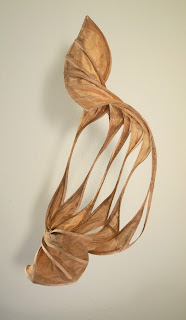 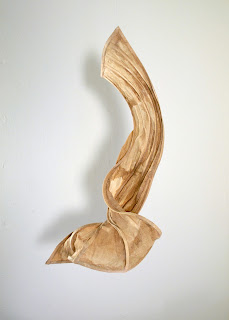 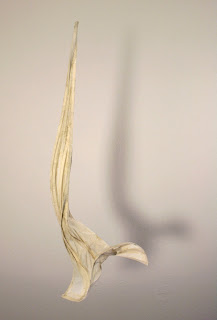 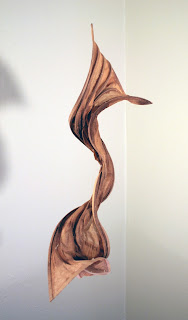 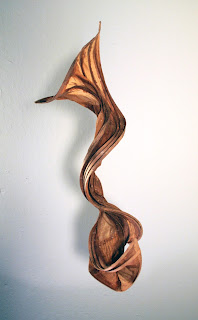 Posted by Rocinante Press at 2:42 PM No comments: